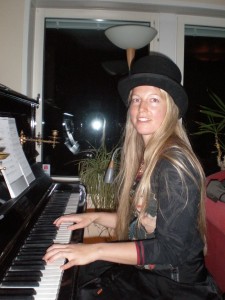 This weekend I had a performance at a private dinner. It was a Birthday party and they wanted me to play my own songs and some covers.
I played several slow and up tempo songs and they joined in the singing, danced, laughed and cryed during the sad songs. In the end I had a big surprise for the hostess. Her husband had asked me if he could play the piano and I the crossflute and then we could perform together as a birthdaygift for his wife. I said yes and we met some days before to play the songs. It was really hard not to tell her about our surprise when she called me. I am not good in general at keeping secrets. 🙂 She enjoyed our performance and afterwards I talked to the nice people at the party. Some of them wanted me to play at their partys too.