It was awhile since I wrote here, it has been quite much lately.
All hard work with the music has given results! After performing in Malmö I went off to Blidö, (My mum´s summerhouse) to relax for a week.
Yesterday I performed at Berns. The sound was great and the grand piano was lovely! The soundcheck was quite fun cause the sound electrician didn´t find the on – button on the piano so I had to show him. It has never ever happened before. 🙂
He was really good and gave me the perfect sound. I talked to him and he told me he is touring with Robyn and that she has one technician for each instrument! That is really something!
I´m glad to be solo, makes things more easy. 🙂

I played from 22.30 til one with some breaks between. It was quite much people and everyone was from Statoil because it was a company event. Afterwards I got nice comments from the audience and then they let the party-people in outside the event and started the dancefloor.
I don´t really like the superficiality that is out there so I took off after talking to the really nice people on the event.
The lighting technician was a really kind person that performed with really nice artists. I like to talk to people that are down to earth and has a good taste in music. 🙂
It took really long time to get home yesterday. I was home around four so I am really tired today. Actually I should practice piano for 2,5 hours but I don´t have the strenght to do it today. I think it can be good for the developement to have small breakes sometimes.
I am so happy to have my music! Love it! 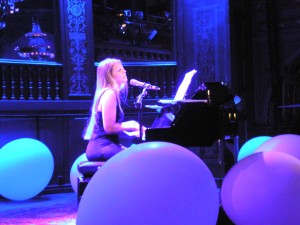 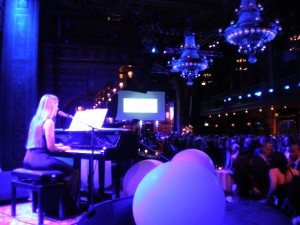